[Note: The following announcement was made on 19 April 2012 by Arturo E. Beéche upon the eve of the marriage of Prince Rudolf of Liechtenstein and Miss Tılsım Tanberk.]

Prince Rudolf of Liechtenstein will be married to Ms. Tilsin Tanberk on April 20, 2012.
Rudolf is the son of Prince Philipp Erasmus of Liechtenstein and of his wife Princess Isabelle (née de l'Arbre de Malander).

Ms Tanberk is the daughter of Mr. Olgun Tanberk and of his wife Melek (née Kampulat).

The wedding is scheduled to take place in Istanbul on Friday, 20 April 2012. 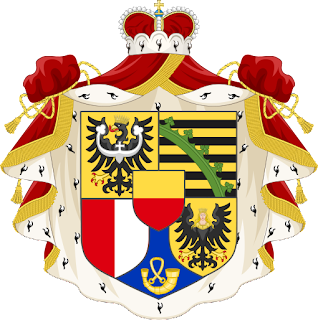 The celebration of the union of Prince Rudolf and Tılsım Tanberk lasted from 20-22 April 2012. On Saturday, 21 April 2012, Prince Rudolf and Princess Tılsım of Liechtenstein were married in a Roman Catholic ceremony at the Cathedral of the Holy Spirit, Istanbul. The reception for the couple was held at Çırağan Palace, a former residence of the Ottoman Imperial Family and now a five star hotel. Among the 500 guests were Prince Philippe of Belgium, Duke of Brabant (now King Philippe I of the Belgians), Princess Michael of Kent, Princess Sibilla of Luxembourg (presumably with her husband Prince Guillaume of Luxembourg), Princess Camilla, Duchess of Castro (presumably with her husband Prince Carlo, Duke of Castro), Princess Margarita and Prince Radu of Romania, and Prince Michael of Yugoslavia as well as by the groom's first cousin Hereditary Prince Alois of Liechtenstein.

The marriage of Prince Rudolf and Princess Tılsım was described by another guest, Patricia della Giovampaola:

The wedding was fabulous. Not a detail was left unattended. A refined and exquisite menu.

The bride and groom, lovely, young and deeply in love. The ceremony was touching, with a choir and an excellent soprano. The ladies were so elegant, all of them wearing hats (as it should be) and mainly nude shoes. However, I've seen an explosion of colors in their dresses: neon green, orange, fuchsia, pinks.

It's Spring, so flowers seem proper in hats.

After the ceremony, we run back to our hotel to change for the great Gala Dinner at the Ciragan Sirayi...

The couple have become the the parents of three children: Princess Alienor Faye (29 September 2014-13 December 2015), and twins Princess Laetitia and Prince Karl Ludwig (b.21 July 2016).

Prince Rudolf (b.7 Sep 1975) attended the Vrije Universiteit Brussel and works in global finance. Princess Tılsım (b.20 Jul 1974) was educated at both Columbia University and Brown University.