Eurohistory's 31st book, The Romanovs Adrift, is out now and selling on AMAZON.COM!

In 1913, the Romanovs celebrated three hundred years of seating on the Russian Imperial throne. Great fanfare and hope accompanied the celebrations. A year later, Imperial Russia entered a "war to end all wars," with the hope of "being back home for Christmas." It was not to be.

Instead, in February 1917, after years of administrative and military ineptitude and incompetence, the Russian people had enough of its government's inefficacy and corruption. The consequences, as it turned out, changed the world. Tsar Nicholas II was overthrown; members of the Imperial Family faced persecution, arrest, financial instability, uncertainty, and worse. This is the compelling story of how the Romanovs dealt with glory, war, revolution, persecution, imprisonment, and escape! 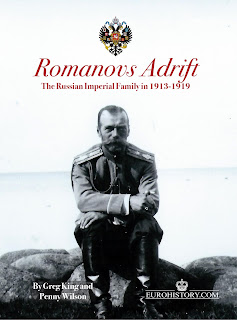 Posted by Arturo Beéche at 1:25 PM