A nice review of DEATH OF A ROMANOV PRINCE 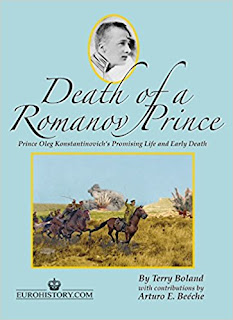 Prof. Roberto Gonzalez has posted an insightful and thoroughly well-written review of Eurohistory's latest contribution to the study of the Romanov Dynasty: Terry Boland and Arturo Beéche's DEATH OF A ROMANOV PRINCE.

Death of a Romanov Prince - Prince Oleg Konstantinovich’s Promising Life and Early Death “The coffin was lowered into the grave...... Soon there was a burial mound above. It was quickly covered with wreaths, flowers and crowned with a plain wooden cross. Prince Oleg’s promising life was finished.” Death of a Romanov Prince follows the brief life-journey of Prince Oleg Konstantinovich, one of the lesser-known members of the powerful and privileged Russian Imperial family. He was a talented young man of intellectual and artistic genius. Oleg was the gifted son of the talented Grand Duke Konstantin Konstantinovich, who wrote under the pseudonym of KR. The Grand Duke was a friend of Tchaikovsky, who set his numerous poems to music, and who established literary circles for his troops, translated Hamlet into Russian, and wrote The King of the Jews, an original play that he and his sons performed. The reader will follow Prince Oleg Konstantinovich, his family, and Imperial cousins, as his life takes him via the luxuries of the family’s four magnificent palaces of Pavlovsk, in Tsarskoye Selo, the Marble Palace in St Petersburg, the Konstantine Palace at Strelna; and the Ostashevo Estate near Moscow; as well as numerous holidays in the Crimea. The young prince enjoyed the most liberal program in literary, scientific, and artistic education. He was the first Romanov to be enrolled in a civilian school and graduated from the Imperial Lyceum in St Petersburg, where in 1913 he won the Pushkin Medal for his academic achievements. At the age of 21, Prince Oleg Konstantinovich was on the crest of a brilliant career and personal greatness when World War I began. Then tragedy struck ... Death of a Romanov Prince brings the reader into the battlefields of World War I’s Eastern Front. Bloody battles fought in northern Poland and Lithuania’s Masurian Lakes. It was while fighting there that Prince Oleg led his troops into heroic cavalry charges against the Germans.


The book can be purchased on AMAZON at:

I became more familiar with personal character and domestic world of Prince Oleg Konstantinovich of Russia, especially in relation to his large immediate and extended families.The beginning chapters increased my comprehension of the extent of the Konstantinovichi branch of Romanov wealth and lifestyle.My appreciation and liking of the Konstantinovichi branch grew as it became apparent that they were not indiscrete contributors to the short-sighted, dynasty-destroying sniping of Nicholas II and Alexandra and the concomitant competition from within the mainline Alexandrovichi, the Vladimirovichi and some members of the Mikhailovichi and Nikhailovichi branches of the Romanov Imperial Family.Numerous photographs throughout the book enhanced my learning.Boland's explanation of those early weeks of the Russian Empire's entry into the Great War, especially the insufficient training of calvary regiments on flat fields which singularly failed to prepare horse and rider to navigate the terrain they actually encountered in battle on the Eastern Front, was the first time that civilian me understood this flawed planning.The differences between German and Russian standards of battle field medical facilities and transports was clarified for me more than ever before in this work.I was highly conscious of my stunned, then startled reaction by the nature of Prince Oleg's war wound.Surely, I've read and own "Gilded Prism," "Memories of the Marble Palace," and the diary entries of Oleg's father K.R., but I had not grasped until reading this book the hideousness of Oleg's fatal injury.Which is just as well, because I am inclined to immerse myself in reading again relevant parts of those other works. Just as I "follow-up" by reading for myself some of the references cited in every book I read.But I was left wondering if better battle field medical facilities located nearer to the Eastern Front could have saved Prince Oleg's life.As a retired Latino counseling psychologist (culturally imbued with the Sorrowful Mother at the Foot of The Cross, which I find similar to the devotion to the Mother of God Orthodox iconography), the worst human suffering I ever saw in my clinical practice were bereaved parents.Bereaved parents' anguish is most often physically manifested in excruciatingly painful, violent abdominal diaphragm spasms that leads the sufferer to feel like they are being ripped in half.So, both personally and professionally, I came away with much more compassion for Prince Oleg's father K.R. and, more than ever, for the Prince's mother "Mavra."Given my own educational background and decades of field-based live-supervision of graduate level individual and family therapists, I found "Death of a Romanov Prince" to be a humanizing case study of one of the lesser known Romanovs.

Posted by Arturo Beéche at 6:48 PM