HER ROYAL HIGHNESS THE DUCHESS OF CAMBRIDGE WAS SAFELY DELIVERED OF A SON AT 11:01AM TODAY.

HER ROYAL HIGHNESS AND HER CHILD ARE BOTH DOING WELL. 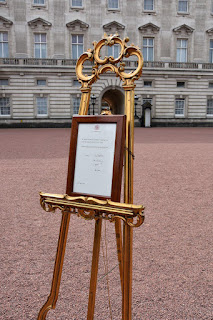 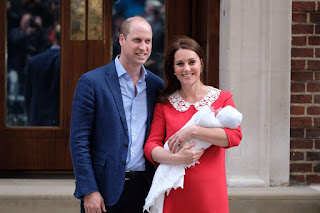 The Duke and Duchess of Cambridge with their newborn son.
Posted by Arturo Beéche at 9:23 PM No comments:

This is the fourth home we have had to build on Blogger!

Somehow, Blogger has logged us out of the three previous Eurohistory blogs. Since there are no human beings tending to customer complaints, our requests for assistance have been ignored!

Hopefully, we will not be logged out of this latest cyber home for The EUROHISTORY Journal!

Some news about what we are are working on...

Issue CXVI, Volume 20.4 has been sent to the printer earlier today!

This issue concludes our 21st year of publication and allows us to conclude 2017...a year that brought our publisher much chagrin, but some wonderful joy in the person of a little boy named Ezra. He is the firstborn son of Arturo Beéche and David Higdon's oldest son Zac. Ezra's mother, María Carlón Bustamante, has been training to handle all our shipping, which she does while not attending her daily classes at university. Besides being a fast learner, María is a fantastic mother and wonderful daughter-in-law.

Both Beéche sons are currently not living at home. Zac is at an institution where his issues stemming from addiction are being addressed. He is making great progress, and while missed greatly, he knows that he needs to be where he is to workman his future as a student, father, spouse and son. While it was awful to have the courts remove him from the Beéche home on his 21st birthday...Zac and the family realize that it was a godsend move. He ought to be rejoining his family in about eight months, if not earlier pending his progress...

Nicholas has always suffered from depression and serious anxiety. Last year was particularly difficult for him. Between June and December, Nicky attempted suicide nine times. Whether trying to jump off a bridge, self-harming, or consuming large amounts of medication, luckily, he failed nine times. The family are extremely thankful to the medical and psychiatric team working with Nicky. For the Beéche, having the dark cloud of their beloved son's constant attempts to end his life was an all-consuming affair. Each attempt led to more therapeutic services and an increased number of weekly meetings with doctors, counselors, parents' groups. At one point the Beéche family had four evening therapy sessions every week.

While sharing this with you all (friends, readers, and cyber strangers) is difficult...it must be done for it explains the reason behind most Eurohistory business, other then shipping books sold through AMAZON, basically stopped between June 2017 and February 2018.

Finally, and after yet another failed self-harming attempt in January 2018, a safe institution was found for Nicky. While he is not happy there and has had a difficult time finding his footing, at least he is surrounded by professionals who can tend to his psychiatric needs. He is where he needs to be!

Then there is little Ezra...

Arturo and David had initially hoped to adopt babies. However, destiny placed Zac and Nicky in their path. "Move on," they were told, "these boys are too damaged and frankly are unadoptable." How could Zac and Nicky's CPS agents refer to them as basically "disposable," Arturo and David wondered. Hence, instead of adopting babies, they adopted Zac and Nicky when they were both ten years old, three years apart. It was not easy. It has never been a "walk in the park," but they are their sons, period!

When Ezra came along in February 2017, neither Arturo nor David thought that they would be involved in the daily caring for their grandson. Yet, life has its own way of sending us curve balls. Two months before departing the family home, Zac talked to his fathers and asked them to welcome María and Ezra to live at the family home. Mother rand son moved in...and then we lost Zac.

So here we are...lost two sons, gained a daughter-in-law and a grandson. While we hope that Zac will be back sooner rather than later, Nicky is a different matter and his return will take longer. Yet, we do hope he returns safe, sane, and ready to embrace life's many opportunities!

Issue CXVI is off our hands!

Issue CXVII will be laid out in a few weeks and sent to print. This will be the first issue of our 22nd year of publication. Most of the articles that will be in this issue have already been received and are being edited at present!

We accept: Visa, MasterCard, US and Sterling Checks, as well as Paypal (eurohistory@comcast.net) 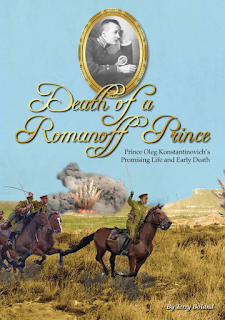 DEATH OF A ROMANOV PRINCE: Prince Oleg Konstantinovich of Russia's Promising Life and early Death, by Terry Boland and Arturo E. Beéche, has also been released to the printer.


The book, handsomely illustrated with over 300 beautiful photos of various branches of the Russian Imperial Dynasty, promises to be a splendid addition to everyone's Romanov book collection.


THE ROMANOVS ADRIFT, The Russian Imperial Dynasty in 1913-1919, by Greg King and Penny Wilson, with an Afterword by Katrina Warne, brings to readers the tragic and compelling drama that engulfed, and eventually decimated, the Romanov Dynasty. This carefully illustrated volume is scheduled for release on July 17-18,. 2018, the centennial of the tragic events in Yekaterinburg!


ROYAL COLLECTIONS III – The Royal House of Bavaria, by Coryne Hall, Seth Leonard, and Arturo Beéche, is in its finishing stages. Nearly all chapters have been completed and are in editing. Once finished with this process we will proceed to complete the layout!


And finally...ROYAL GATHERINGS BY THE BAY AND IN THE HAGUE are scheduled for October 6 and 7 (San Francisco) and November 10-11 (The Hague). If interested in attending these fantastic royalty study weekends, don't hesitate to get in touch with us!

ISSUE CXVI off to printer!

It is with my relief and, frankly, joy that we can share with you that ISSUE CXVI, Volume 20.4 (Winter 2017) has been released to our printer!

The publication of this particular issue brings to an end a very challenging year. Inside it, our publisher will include a message for each one of our subscribers sharing the challenges (personal) that he faced (along with his family) in 2017. These caused a disruption in our publication schedule, as well as in the production of our sought-after books. However, the future is bright and we are back to full steam ahead!

We wish to express our sincerest appreciation for your support during this tough period!

Inside Issue CXVI, readers will find the following articles:

1. Obituary: King Michael I of Romania, by Marlene Eilers Koenig

2. Turin and "the Crown of Delights," by Katrina Warne

3. A Last Gasp of Imperial Russia – The Wedding of Prince George of Battenberg and Countess Nada de Torby, by Coryne Hall

4. Ernestine Castles and Palaces in Thuringia, by Susan Symons

5. Book Review: The Quest of Queen Mary, by Rick Hutto

6. Who is in the photograph: Tuxen's Painting of Nicholas and Alexandra's Wedding, by Ilana D. Miller


We expect the printed magazine to arrive here by the end of May, tag which point we will proceed to ship immediately, along with renewal forms.

We hope you continue supporting us, 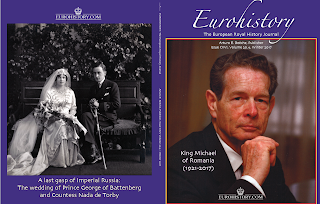 Posted by Arturo Beéche at 3:02 PM No comments: