Head of Imperial House of Russia Calls for Peace 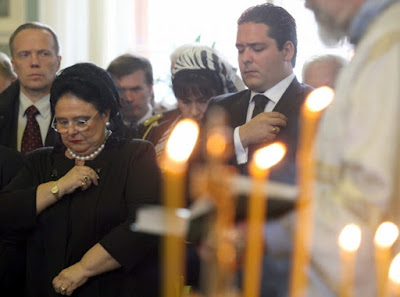 FROM THE HEAD OF THE IMPERIAL HOUSE OF RUSSIA

"Events taking place in our Homeland have been very alarming and deeply grieving.
Fully recognizing the independence and sovereignty of all the states that were formed after the fall of the USSR, I am at the same time convinced that all of the peoples who historically belonged to the civilizational space of the former Russian Empire are united by the concept of a Homeland in the highest spiritual and cultural sense of the word.
It is frightful and painful to see how, for the past 8 years, brothers and sisters, whose fathers, grandfathers, and great-grandfathers together defended their common Homeland, have been pitted against each other and spilt their blood; how peaceful citizens are dying and suffering; how parents shed inconsolable tears over the coffins of their children. Now the course of these events has culminated in an even greater cataclysm.
The Russian Imperial House does not make statements of a political nature, and in any event, in the current conditions we do not have complete information that would allow us to make them without risking unintended harm. But we are utterly convinced and will always affirm that Russia and Ukraine—all their populations—must never be enemies. This is as monstrous and unnatural a thing as members of the same family murdering each other.
I, my son and heir, The Grand Duke George of Russia, and his spouse, Princess Victoria Romanovna, pray for the immediate implementation of peace.
We are deeply grateful to those who are now making efforts to prevent war and provide assistance to the suffering: the wounded, those who have lost their homes and belongings, and refugees.
May Almighty God save our peoples and may He free us from fratricidal enmity."
H.I.H. The Grand Duchess Maria of Russia
Madrid, 11/24 February 2022
Posted by Seth B. Leonard at 9:30 PM