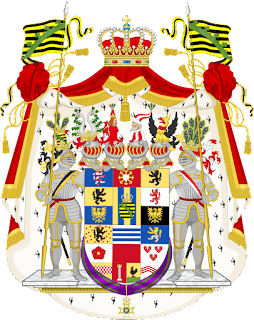 In October 1933, Prince Bernhard was arrested as a member of the Nazi Party in Austria. By December, it was reported that he was to be held at Wöllersdorf, Austria, after being sentenced to a six week imprisonment. His wife, Margot, was placed under house arrest last the couple's residence, Schloß Pitzelstettin, as the result of a letter that she sent to a correspondent in Germany that was "full of invective against Austria." In January 1934, Bernhard and Margot fled to Italy, where they perhaps felt more comfortable as that country was already under the rule of Benito Mussolini.


Prince Bernhard of Saxe-Meiningen died on 4 October 1984 at Bad Krozingen. He was eighty-three years-old. Bernhard had been the titular Duke of Saxe-Meiningen since the death of his brother Georg in 1946, due to the fact that Georg's only surviving son Friedrich-Alfred had become a Roman Catholic monk and renounced his dynastic rights in favour of his uncle.

Prince Friedrich-Ernst "Friedel" Georg Bernhard of Saxe-Meiningen was born at Meiningen on 21 January 1935. The young prince spent his early childhood in the family home on Bernhardstrasse in Meiningen and at his grandparents' manor in Silesia. His love for animals and plants also developed here.

Friedrich-Ernst was able to fully enjoy the last almost full moon of his lifetime over the Swiss Jura, the Rhine Valley and his forest park - in an incredible night mood - forgetting the exertion and the pain. However, the end of World War II and the following years were filled with losses that were just as formative: the loss of his homeland with the escape from Silesia, the departure from Meiningen, the divorce of his parents.

The prince decided to leave school early in order to learn the profession of a hotel manager, to work on his own abroad when he was young. During this time, his need for a harmonious environment, which he did not always find in his life, was accentuated even more.

At the age of twenty-four, he took his chances and utilised his linguistic skills and sales talent and moved into the paper industry as a sales manager. Friedrich-Ernst then made a career in the steel industry at the age of twenty-six. The prince eventually went to work for the Thyssen group.


In 1977, Friedrich-Ernst married Princess Beatrice of Saxe-Coburg and Gotha in a civil ceremony on 11 June 1977 at Coburg; the couple celebrated their religious wedding on 12 June 1977 in Coburg. Princess Beatrice (b.Bern 15 Jul 1951) is the daughter of Prince Friedrich Josias of Saxe-Coburg and Gotha (1918-1998) and his second wife Denyse Henriette von Muralt (1923-1984). Friedel and Beatrice had two children: Princess Marie Alexandra "Alix" Elisabeth Beatrice (b.Heilbronn 5 July 1978) and Prince Friedrich Constantin. Friedel and Beatrice separated but never divorced.

Friedrich-Ernst and Beatrice were third cousins once removed. The couple both descended from Fürst Ernst zu Hohenlohe-Langenburg (1794-1860) and Princess Feodora zu Leiningen (1807-1872). Feodora was the daughter of Fürst Emich Carl zu Leiningen (1763-1814) and Princess Viktoria of Saxe-Coburg-Saalfeld (1786-1861). Four years after the death of her first husband, Princess Viktoria married Prince Edward, Duke of Kent: they became the parents of Queen Victoria of the United Kingdom (1819-1901). Princess Beatrice of Saxe-Coburg and Gotha is a descendant of Queen Victoria, as well as of her older half-sister Princess Feodora: her paternal grandparents, the last reigning Duke and Duchess of Saxe-Coburg and Gotha were a grandson of Queen Victoria and a great-granddaughter of her half-sister Feodora.

On 17 July 2002 at Gravedona, Italy, Princess Marie-Alix of Saxe-Meiningen was religiously wed to Benno Beat Christian Widmer (b.Basel 17 July 1971). Two years later, the couple contracted a civil marriage on 26 April 2004 at Basel. Marie-Alix is an attorney, as was her husband Benno. The pair divorced in 2009. They did not have children. Princess Marie-Alix has had a most extraordinary career: A Princess, a Poisoning and an Oil Fortune -The Bizarre Corruption Scandal at Bilfinger.

After a long illness, Prince Friedrich-Ernst of Saxe-Meiningen died on Tuesday, 13 July 2004. He was sixty-nine years-old. A memorial service was held on Thursday, 22 July 2004.

In the Summer of 2015, Prince Constantin of Saxe-Meiningen and Sophia Lupus (b.1995) welcomed the arrival of a son. Sophia is the daughter of Nothart Rohlfs and Sabine Lupus. Their only son, Michael, was born on 26 July 2015 in Switzerland.

The Head of the Saxe-Meiningen dynasty is considered to be Prince Konrad, the half-brother of Prince Friedrich-Ernst and the uncle of Prince Constantin. A banker, Konrad has never married. At various times, the prince has indicated that he intends for his heir to be his nephew Constantin.
Posted by Seth B. Leonard at 6:25 PM