The Duke and Duchess of Sussex: Rogue Royals?

On Wednesday, 8 January, Their Royal Highnesses The Duke and Duchess of Sussex announced that they intend to step back as “senior royals” in 2020. However, the royal couple will remain as working members of the Royal Family. The duke, who is the second son of the Prince of Wales and the late Diana, Princess of Wales, is sixth in the line of succession to the British throne. The then Prince Harry of Wales married Meghan Markle in 2018; their son Archie Mountbatten-Windsor was born in 2019.

The duke and duchess will work to become financially independent while fully supporting The Queen, their statement read. Their announcement has no effect on their royal titles or on the duke and his son's place in the line of succession: this can only be changed via an Act of Parliament. On the website of the Duke and Duchess of Sussex, particular emphasis is placed on their desire to achieve financial independence while still carrying out certain royal duties as well as maintaining their patronages. Given this, it seems the couple may be trying to protect the British royal family from criticism that has constantly been levelled by the press at nearly all members, at one time or another over the past three centuries, in regards to the cost of upkeep of royal family members. The following is from Sussex Royal:


Why are The Duke and Duchess of Sussex choosing this new working model?

The Duke and Duchess of Sussex take great pride in their work and are committed to continuing their charitable endeavours as well as establishing new ones. In addition, they value the ability to earn a professional income, which in the current structure they are prohibited from doing. For this reason they have made the choice to become members of the Royal Family with financial independence. Their Royal Highnesses feel this new approach will enable them to continue to carry out their duties for Her Majesty The Queen, while having the future financial autonomy to work externally. While the contribution from The Sovereign Grant covers just five percent of costs for The Duke and Duchess and is specifically used for their official office expense, Their Royal Highnesses prefer to release this financial tie. More details on the specifics of the Sovereign Grant are outlined below.

What is the Sovereign Grant?

The Sovereign Grant is the annual funding mechanism of the monarchy that covers the work of the Royal Family in support of HM The Queen including expenses to maintain official residences and workspaces. In this exchange, The Queen surrenders the revenue of the Crown Estate and in return, a portion of these public funds are granted to The Sovereign/The Queen for official expenditure. This is outlined in the 2018-19 Annual Report of the Sovereign Grant which is linked below. Please note, this structure replaced The Civil List in 2012. More details on this can be found on The United Kingdom’s public sector information website: gov.uk

Do any other members of the Royal Family hold a title and earn an income?

Yes, there is precedent for this structure and applies to other current members of the Royal Family who support the monarch and also have full time jobs external to their commitment to the monarchy.

Do The Duke and Duchess of Sussex earn income?

No, under the current structure and financing arrangements, they are prohibited from earning any income in any form.

Do The Duke and Duchess of Sussex benefit financially from their charitable and cause-driven work?

By becoming financially independent, will The Duke and Duchess of Sussex be cutting ties with the monarchy?

As working members of the Royal Family, The Duke and Duchess of Sussex remain dedicated to maximising Her Majesty’s legacy both in the UK and throughout the Commonwealth. They will continue to proudly do so by supporting their patronages and carrying out works for The Monarchy within the UK or abroad, as called upon.

The Sussexes will divide their time between the UK and North America. As part of the decision of the couple to adapt their working model, they have also adopted a media relations policy, which is outlined on their website, that will be more conducive to their role.

How will The Duke and Duchess of Sussex handle media relations in the future?

In the spring of 2020, The Duke and Duchess of Sussex will be adopting a revised media approach to ensure diverse and open access to their work. This adjustment will be a phased approach as they settle into the new normality of their updated roles. This updated approach aims to:

What is the ‘Royal Rota’ system?

The Royal Rota was established more than 40 years ago as a way of giving UK print and broadcast media exclusive inside access to the official engagements of members of the Royal Family.

Under this system, the rota, or pool, gives these British media representatives the opportunity to exclusively cover an event, on the understanding that they will share factual material obtained with other members of their sector who request it. The current system predates the dramatic transformation of news reporting in the digital age. The core group of UK outlets with Royal Rota access remain the predominant news source through which worldwide media organisations receive content on the official engagements of members of the Royal Family. These UK media outlets are: The Daily Express, The Daily Mail, The Daily Mirror, The Evening Standard, The Telegraph, The Times, The Sun.

Why have The Duke and Duchess of Sussex elected to change their media policy now?

The Duke and Duchess have chosen to revise their media policy to reflect both their forthcoming change as members of the Royal Family with financial independence, and their wish to reshape and broaden access to their work.

See below for the full statement of the Duke and Duchess of Sussex: 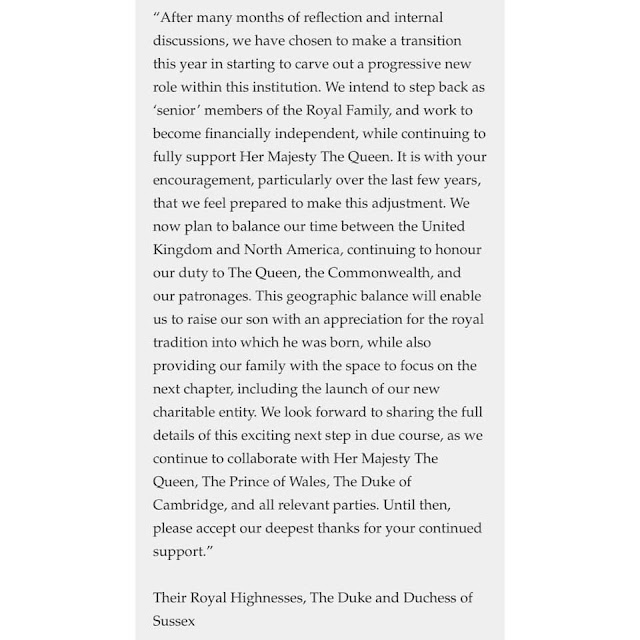 It is unclear how much coordination the Duke and Duchess of Sussex have undertaken with The Queen and the rest of the Royal Family in regards to their decision. Buckingham Palace issued the following statement this evening, indicating that the institution might not have been fully aware of the Sussexes' plans: 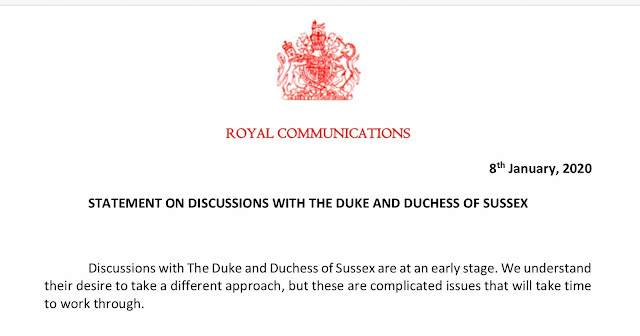 Source:
Sussex Royal - Funding
Harry and Meghan to step back as senior royals
Royal Family 'deeply disappointed' as Prince Harry and Meghan fail to consult them before 'stepping back'

https://eurohistoryjournal.blogspot.com/p/subscribe-to-eurohistory.html
Posted by Seth B. Leonard at 2:41 PM