The prince was born on 11 July 1986 at Saint-Raphaël, Var, as the second child and only son of Prince Charles Napoléon (b.1950) and Princess Béatrice of Bourbon-Two Sicilies (b.1950). The couple were married in a civil ceremony only in 1978, much to the consternation of both sets of parents. Charles and Béatrice divorced in 1989. Jean-Christophe has an older sister, Princess Caroline (b.1980), as well as two younger sisters, Sophie (b.1992) and Anh (b.1998; adopted). 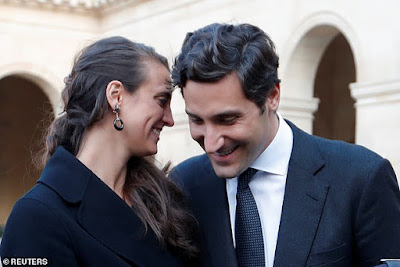 The engagement between Prince Jean-Christophe Napoléon and Countess Olympia of Arco-Zinneberg was announced earlier this year. The couple are to be married in Paris on 19 October 2019. Jean Christophe works for The Blackstone Group, a private equity firm, in London; Olympia is an art historian.

https://eurohistoryjournal.blogspot.com/p/subscribe-to-eurohistory.html
Posted by Seth B. Leonard at 3:12 PM