From Tyranny To Freedom: The Sometimes Stranger than Fiction Life of a Noble and Notable Lady

From Tyranny To Freedom: 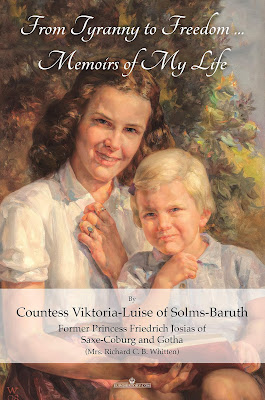 Countess Viktoria-Luise of Solms-Baruth (1921-2003) led one of the most extraordinary lives imaginable.

Born to an extremely well-connected German noble family, her godmother and namesake was Viktoria-Luise’s maternal great-aunt, Auguste Viktoria of Schleswig-Holstein-Sonderburg-Augustenburg, the last German Empress and first wife of Wilhelm II. Viktoria-Luise was raised in a Germany reeling from the aftermath of defeat in World War I and she grew into adulthood during the dark days of the Third Reich. Her family was firmly against the Nazi regime, and eventually her father (and some other family members) was jailed because of his opposition to the insanely horrific policies of Adolf Hitler.

On the cusp of her 21st birthday, Viktoria-Luise wed her first cousin (their mothers were sisters) Prince Friedrich Josias of Saxe-Coburg and Gotha. This union was of short duration due to the total incompatibility of their characters, but before divorcing the couple did have one child, Andreas, who his mother referred to as “my little prince.” Today Prince Andreas is the Head of the Ducal House of Saxe-Coburg and Gotha. Now in his golden years, the Prince recently released his own compilation of memoirs (I did it my way). From what this reviewer has read and heard, Andreas seems to be much loved by the people of Coburg, the town of his ancestors which he has called home since he returned to Germany in the 1960s.

Not long after the defeat of the Axis Powers, a charming American army officer named Richard Whitten entered the scene. He and Viktoria-Luise fell in love and eventually married. This marriage brought much happiness and much change into Viktoria-Luise’s life. After living for a few years in Europe, the couple and their small children (Andreas and the couple’s young daughter, Victoria) moved to America.

The last chapters of this collection of reminiscences unfold as Viktoria-Luise (at times, quite hilariously) tells the reader of her adaption to life as a “normal” housewife in the United States. In addition to the different culture, she was faced with so many new responsibilities and situations, but she certainly learned how to “fit in” with the way of life in this country—all the while remaining conscious of her heritage and retaining close ties to all of her numerous royal and noble relatives in Europe. The book comes to a close in the 1950s; perhaps the author intended to share more, but simply ran out of earthly time.

If I recall correctly, these memoirs were written when Viktoria-Luise was an elderly lady living in Louisiana. Her personality jumps off the pages as when one reads her book. She is candid, funny (her sense of humor and self-deprecation made me burst into laughter several times), honest and “sharp as a tack.” It is almost as though you are sitting with her in her living room listening to her speak.

From Tyranny to Freedom—Memoirs of My Life is truly a top favorite on my shelf.

Read Viktoria-Luise's story and you will not fail to be charmed by this amazing woman.

One can purchase From Tyranny to Freedom—Memoirs of My Life by either ordering directly from Eurohistory or by visiting Amazon: