Concern About The Health of Princess Margarita of Romania

For some years, the Romanian press has published reports that Princess Margarita, the eldest daughter of King Michael and Queen Anne, is dealing with ill health.


The first articles appeared during the period when the Romanian royal family was reeling from the loss of King Michael of Romania, who died on 5 December 2017 in Switzerland. His Majesty's funeral was held in his country later that month. The royal family observed an extended period of mourning.

One news outlet carried the following article in December 2017 regarding the health of the princess:

After her mother's death, last year [in 2016], many reported that Princess Margarita was transformed by suffering. However, no one suspected that the situation was a serious one.

Her appearances in public a few days later also did not allow the suffering of the princess to be seen.

But on Wednesday morning at Otopeni Airport, when the entire Royal Family was waiting for the arrival of the aircraft that brought the coffin to King Michael's body, the princess gave evidence that she did not feel well.

Then, at some point, she even sat down in her assigned chair, and then had to ask for help from Prince Radu when she needed to either stand up again or sit down. During the ceremony at the airport, the princess grasped her husband's hand repeatedly.

This is not the first time that Princess Margarita, [then] 68, shows signs of malady. Last year, shortly after her mother's death, the weakened princess, drawn in the face and pale, shocked many people at her appearance in the church in Săvârșin, where a service was held in memory of Queen Anne.


In September 2018, reports about the royal's condition again surfaced when Margarita fell ill while attending the 90th anniversary of the construction of the Heroes' Cross at Caraiman:

Princess Margarita, Crown Custodian, who walked on Saturday at the Cross of Caraiaman, felt badly during the ceremonies organised on the occasion of the 90th anniversary of the inauguration of the royal monument with the support of the Royal House. She did not require medical care afterwards.

Princess Margarita was one of the participants at Saturday's Caraiman ceremony, located at almost 2,300 meters altitude. Local sources told News.ro that Margarita felt poorly during the ceremony after she had walked along a path to climb to the Caraiman Cross.

"It's a long, tiring road that many people cannot walk through without difficulty. It is worth appreciating the effort of the princess and the fact that she went up there," Gheorghe Haiduc told News.ro.

Closer to home, more immediate worries about the wellbeing of Princess Margarita were expressed by her sister Princess Marie when she took to social media in February 2017. 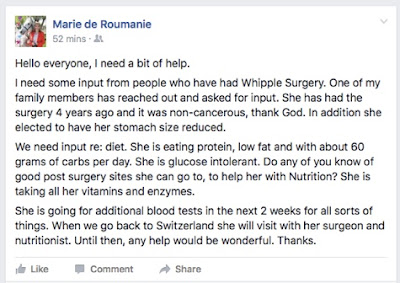 At that time, Marie of Romania stated that a family member had undergone the Whipple procedure (also known as a pancreaticoduodenectomy). According to the Mayo Clinic:

The Whipple procedure is a complex operation to remove the head of the pancreas, the first part of the small intestine (duodenum), the gallbladder and the bile duct.

The Whipple procedure is used to treat tumors and other disorders of the pancreas, intestine and bile duct. It is the most often used surgery to treat pancreatic cancer that's confined to the head of the pancreas. After performing the Whipple procedure, your surgeon reconnects the remaining organs to allow you to digest food normally after surgery.

The Whipple procedure is a difficult and demanding operation and can have serious risks. However, this surgery is often lifesaving, particularly for people with cancer.

Princess Margarita became a Swiss citizen during a naturalisation ceremony at Lausanne in June 2017. The princess was born at Lausanne on 26 March 1949 - she celebrated her seventieth birthday this year. Margarita is the only one of her siblings to become a Swiss citizen; she would thus be able to benefit from the country's universal healthcare system. In addition, the princess likely has resources that would allow her to receive the very best medical treatment.