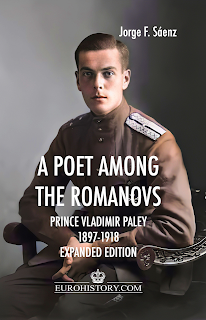 Prince Vladimir Paley, first cousin of the last tsar, was a poet among the Romanovs. The rules of the Imperial Family prevented him from being considered a member of the dynasty due to the unequal marriage of his parents. This circumstance could have saved his life. Instead, when he was requested by the Bolsheviks to denounce his father, Grand Duke Paul Alexandrovich of Russia, young Prince Vladimir chose love, loyalty, honor, and affection. His only crime was being related to a dynasty of which he had not even been an official member. This is the compelling story of a young man, and a talented poet, who in different circumstances would have attained great heights.. Destiny, however, played a sad role in bringing a brutal and early death to a promising life … 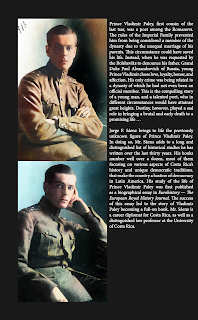 Jorge F. Sáenz brings to life the previously unknown figure of Prince Vladimir Paley. In doing so, Mr. Sáenz adds to a long and distinguished list of historical studies he has written over the last thirty years. His books number well over a dozen, most of them focusing on various aspects of Costa Rica’s history and unique democratic traditions, that make the country a bastion of democracy in Latin America. His study of the life of Prince Vladimir Paley was first published as a biographical essay in Eurohistory — The European Royal History Journal. The success of this essay led to the story of Vladimir Paley becoming a full-on book. Mr. Sáenz is a career diplomat for Costa Rica, as well as a distinguished law professor at the University of Costa Rica.

EUROHISTORY is pleased to announce the hardback publication of this rare and uniquely extraordinary work of royal biography!

This book was first published in paperback nearly 20 years ago. The UPDATED and EXPANDED hardback edition contains more information than the original, as well as a new 24-page photo section different than the few images included in the original paperback edition!

To purchase directly from us, you can click on the following link:

Posted by Arturo Beéche at 7:23 PM No comments: 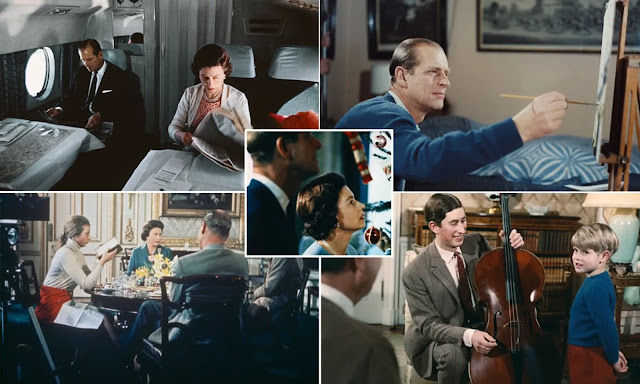 This is not a drill. The embargoed 1969 documentary Royal Family is currently available on YouTube in all its glory. Enjoy the forbidden fruit while it is available!

Here is the link: https://youtu.be/EX8eX6weSHc
Note: as of Thursday, 28 January, the video is no longer available due to a copyright claim by British Broadcasting Corporation (BBC). The 1969 Royal Family documentary was uploaded onto YouTube last week.
Posted by Seth B. Leonard at 5:00 PM No comments:

Twenty Years Since the Death of the May Queen: Marie-José of Italy

On 27 January 2001, Queen Marie-José of Italy passed away in Geneva. She was ninety-four years-old.

Princess Marie-José Charlotte Sophie Amélie Henriette Gabrielle was born on 4 August 1906 at Ostende as the third child and only daughter of King Albert I of the Belgians (1875-1934) and his wife Queen Elisabeth (1876-1965; née Duchess in Bavaria). Marie-José had two older brothers: the eventual King Léopold III (1901-1983) and Prince Charles, Count of Flanders (1903-1983).
In 1930, Princess Marie-José of Belgium married Prince Umberto of Savoy, Prince of Piedmont and the heir to the Italian throne. Umberto was the only son of King Vittorio Emanuele III of Italy (1869-1947) and Queen Elena (1873-1952; née Princess of Montenegro). Umberto and Marie-José had four children: Princess Maria Pia (b.1934), Prince Vittorio Emanuele (b.1937), Princess Maria Gabriella (b.1940), and Princess Maria Beatrice (b.1943). Umberto and Marie-José had rather different temperaments, and their marriage was not a union of love. In May 1946, Umberto succeeded his father as King of Italy, and thus Marie-José became queen. Their reign was short-lived; it lasted thirty-four days, from 9 May to 12 June 1946.
After the royal family left Italy following the referendum abolishing the monarchy, Umberto and Marie-José settled in Portugal with their children. This cohabitation was of brief duration: Queen Marie-José moved to Switzerland, and King Umberto remained at Cascais. Although informally separated, the last King and Queen of Italy often appeared together at Gotha events over the decades.
The year of 1983 brought great loss to Queen Marie-José. In March, her husband of fifty-three years, King Umberto II, died in Geneva at the age of seventy-eight. In June, her brother Prince Charles, Count of Flanders, died at the age of seventy-nine. In September, her last surviving brother King Léopold III of the Belgians, who had abdicated in 1951, died at the age of eighty-one. Thus, in the space of one year, Marie-José lost her husband and both of her siblings.
For some years, the queen lived in Mexico with her youngest daughter Princess Maria Beatrice. After the death of her husband, Marie-José returned to Italy for a visit. The May Queen died at a Geneva clinic of lung cancer. Marie-José was survived by her four children.
The burial of Queen Marie-José of Italy took place on 2 February 2001 at Hautecombe, Savoy, France. The queen was buried next to King Umberto II. Besides her children and grandchildren, the attendees included King Albert II and Queen Paola of Belgium, Grand Duchess Joséphine-Charlotte of Luxembourg, King Juan Carlos of Spain and his sister Infanta Pilar, Empress Farah of Iran, the Duke and Duchess of Aosta as well as the duke's children Prince Aimone and Princess Bianca, the Duke and Duchess of Braganza, Princess Béatrice of Bourbon-Two Sicilies, the Duke and Duchess of Calabria, Archduke Carl Christian and Archduchess Marie-Astrid of Austria, Prince Alexander and Princess Barbara of Yugoslavia, and Prince Michael of Greece. A wreath of flowers was sent by Prince Rainier II of Monaco.
______________
For further news and articles about Europe's imperial, royal, and noble families, join Eurohistory:
Subscribe to the European Royal History Journal!
Posted by Seth B. Leonard at 6:30 AM 2 comments:

Stunning Pictures from the Russian Imperial Betrothal Ceremony at Kostroma

In the Russian Orthodox Church, the wedding ceremony is divided into two sections: the Betrothal (obrucheniye or Обручение) and the Crowning (venchaniye or Венчание). In the modern day, the ceremonies are most frequently combined, but in the past, they were two separate ceremonies. Grand Duke George Mikhailovich of Russia and his fiancée Victoria Romanovna Bettarini chose to celebrate the ceremony of Betrothal at the Ipatievskii Monastery at Kostroma on Sunday, 24 January 2021.
During the Time of Troubles in Russia, the Ipatievskii Monastery was occupied by the supporters of False Dmitri II in Spring 1609. In September 1609, the monastery was captured by the Muscovite army. On 14 March 1613, the Zemsky Sobor announced that Mikhail Romanov, who was in the Ipatievskii Monastery at the time, would be Russian tsar.

Most of the monastery buildings date from the 16th and 17th centuries. The Trinity Cathedral is famous for its elaborately painted interior. The Church of the Nativity of the Mother of God was rebuilt by the celebrated Konstantin Thon at the request of Tsar Nicholas I to celebrate the 250th anniversary of the House of Romanov. The Soviet authorities demolished it in 1932; however, it was rebuilt in 2013. The main entrance from the riverside was also designed by Konstantin Thon. A private house of Mikhail Romanov was restored on the orders of Tsar Alexander II.
At the Betrothal service, the chief ceremony is the blessing and exchange of rings. The rings are blessed by the priest in the name of the Father, of the Son, and of the Holy Spirit. The priest then exchanges the rings, taking the bride's ring and placing it on the groom's finger and vice-versa. Then he exchanges them again, symbolizing that each spouse will constantly be complementing and enriching the other by the future union.

This is also an outward symbol that the two are joined in marriage of their own free will and consent. It is celebrated in the vestibule or the pritvor (Притвор) of the church building before their procession into the nave of the church.

Grand Duke George Mikhailovich of Russia and his fiancée Victoria Romanovna Bettarini chose to practice the ancient version of the custom in an ancient place very special to the House of Romanov.

The Baptism of Maria-Alexandra of Romania 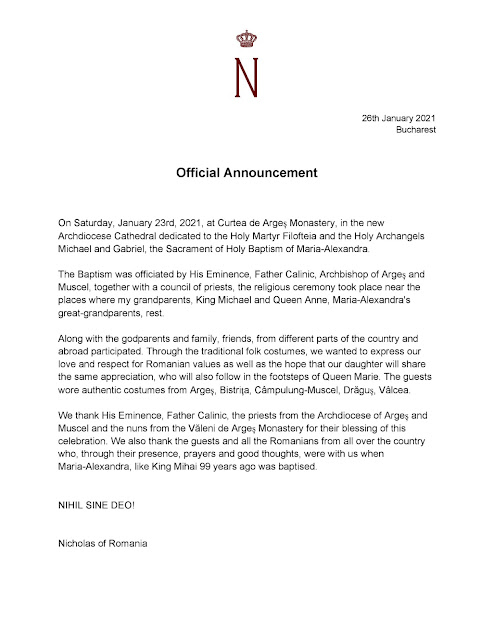 Our congratulations to Nicholas, Alina-Maria, and Maria-Alexandra on this special event in the life of the little one!
Posted by Seth B. Leonard at 10:18 AM No comments:

On Sunday, the Russian Imperial Chancellery announced that Grand Duke George Mikhailovich of Russia and Victoria Romanovna Bettarini had held their betrothal ceremony that day in Kostroma.

Here is the press release:

The betrothal of Tsesarevich George of Russia and his bride-to-be, Miss Victoria Romanovna Bettarini, took place at the Ipatiev Monastery in the city of Kostroma

On January 24, 2021, at noon, the Heir of the Head of the Imperial House of Russia, His Imperial Highness The Grand Duke George of Russia, and his fiancée, the hereditary noblewoman Miss Victoria Romanovna Bettarini, were betrothed in the Holy Trinity Cathedral in the Ipatiev Monastery in the city of Kostroma. The betrothal service was officiated by His Eminence Metropolitan Ferapont of Kostroma and Nerkhta. Among those attending the service were government officials of the Kostroma Region.

In the morning, the Grand Duke and his fiancée attended Divine Liturgy at the Cathedral of the Holy Epiphany-St. Anastasia in Kostroma, receiving Holy Communion and venerating the great and holy icon of the House of Romanoff—the Feodorovskaya miracle-working Icon of the Mother of God.

Then the couple proceeded to the Holy Trinity Ipatiev Monastery, where the betrothal service took place, officiated by His Eminence Metropolitan Ferapont and other clergy of the Kostroma diocese.

Later that same day, Grand Duke George and Victoria Romanovna, accompanied by Archpriest Dimitri Sazonov, visited the construction site of the new church at the Second City Hospital of Kostroma, and the Children’s Maritime Center.

The Passing of a Vietnamese Princess and Italian Duchess

Princess Phuong Mai of Vietnam, Dowager Duchess di Addis Abeba, was privately buried on 21 January 2021. She is survived by her two children, her two grandchildren, her two sisters, and her nieces and nephew.