It is with great pleasure that we are able to announce to you that our latest book, The Grand Ducal House of Hesse, has gone to print!

With more than 400 beautiful images, the 336 pages inside the book bring to life the story of the Grand Ducal House of Hesse (and by Rhine), from its beginnings as Landgraves to Hesse-Darmstadt.

The authors, Arturo E. Beéche and Ilana D. Miller, conducted extensive research in several countries and received assistance from several living descendants of of members of this now extinct dynasty.

The story is gripping, tragic, joyful, hopeful. Eurohistory hopes that readers will find the book as spellbinding as the authors intended it to be!


The Grand Ducal House of Hesse will be available for purchase through our usual outposts (Eurohistory, Hoogstraten Bookstore, Galignani, AMAZON) in the second half of August! 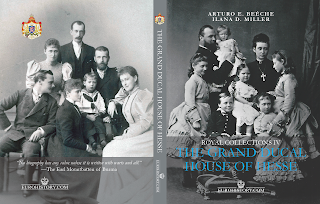 The books chapters include:

The Grand Duchy of Hesse in the German Empire

Chapter I: The Landgraves of Hesse-Darmstadt

Chapter VIII: The Next Generation Settles Down and Tragedy Strikes Again

Chapter X: The End of an Ancient Line

Chapter XI: The Women of Darmstadt