Queen Marie of Romania from Abis Studio on Vimeo.

If you are interested, you can rent online the film Queen Marie of Romania (Maria - Inima Romaniei), produced by Abis Studio. It is available with subtitles in English, French, and Romanian. Alexis Sweet Cahill directed the movie, which focuses on the pivotal role that the Queen, a granddaughter of Queen Victoria and Tsar Alexander II, played in lobbying for her nation's interests after World War I:


Devastated by the First World War and plunged into political controversy, Romania's every hope accompanies its Queen on her mission to Paris, to lobby for its great unification's international recognition at the 1919 Peace Talks.

Queen Marie of Romania was the daughter of Prince Alfred, Duke of Edinburgh, Duke of Saxe-Coburg and Gotha, and his wife Grand Duchess Marie Alexandrovna. Marie married the eventual King Ferdinand of Romania; during their marriage, she had six children: King Carol II of Romania (1893-1953); Queen Elisabeta of Greece (1894-1956; ex-wife of King George II of the Hellenes), Queen Marie of Yugoslavia (1900-1961; wife of King Alexander I of Yugoslavia), Prince Nicholas (1903-1978), Princess Ileana (1909-1991; ex-wife of Archduke Anton of Austria-Tuscany; Orthodox nun under the name Mother Alexandra), and Prince Mircea (1913-1916). 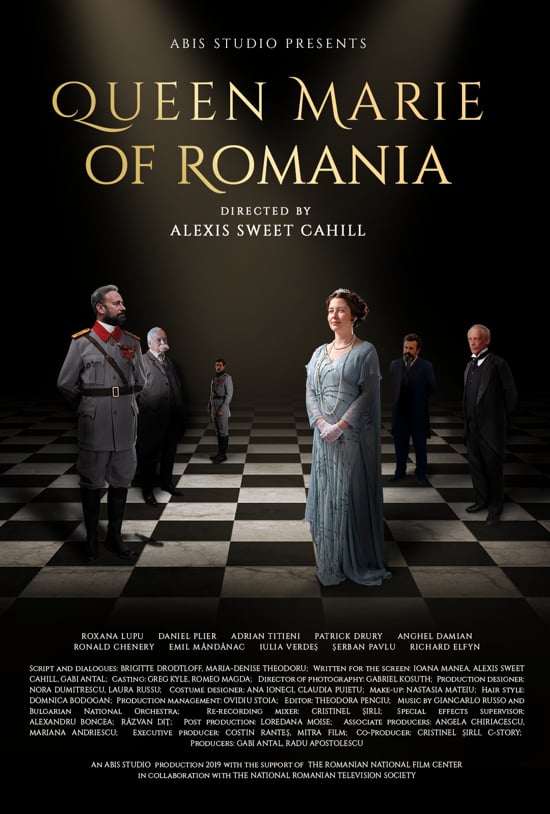 The film has been presented extensively in Romania at various film festivals and showings. A number of these have been attended by Queen Marie's great-great-grandson, Prince Nicholas of Romania (the grandson of Marie's grandson King Michael), together with his wife Princess Alina-Maria.


The film may also be viewed at its website: Queen Marie of Romania