EUROHISTORY: The Duke – The Life of Duke Carl Eduard of Saxe-Coburg and Gotha 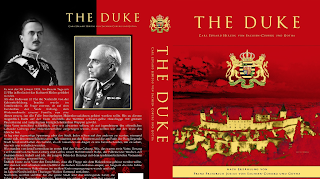 Now that we have published all the pending magazines from 2018, as well as signed off on the final version of The Royal House of Bavaria, Volume I, we are focused on our next project, Eurohistory's 32nd book!

THE DUKE – The Life of Duke Carl Eduard of Saxe-Coburg and Gotha was built on the memoirs of his youngest son and successor Prince Josias (1918-1998). The manuscript written by the prince was close to 600 pages. Out of those excerpts were taken to provide a truthful, fair, and balanced of the author's very complicated relationship with his father, an extremely complex person as well.

Initially published in German last year, Eurohistory's vast photographic collection, along with the ducal family's photographic archive provided for a well-documented book in which photography complements the narrative.

We are in full translation mode and expect that THE DUKE – The Life of Duke Carl Eduard of Saxe-Coburg and Gotha will be out later this summer!